There’s magic afoot in .  Something strange and wonderful is happening in .  The fairies are moving in!
It all started less than two months ago when Major Mace and his wife Sue began constructing a cluster of delightful homes in for the fairies.
Major – that’s his real first name, not a military title – found inspiration in the Irish town of in Donegal where there’s a popular fairy walk by the river.  Having already overseen the construction of ’s famous  driftwood pirate ship, The Black Pearl, (along with the rest of the Pirates at Art crew, Frank Lund, Norman and Alison Ord and John Paul), Major was no stranger to getting creative with upcycled bits and pieces.
Alongside Major, Alison paints doorknobs to resemble fairy toadstools and John Paul creates Tree People, whilst Sue glues together tiny pieces of furniture to decorate houses fit for any Fairy King or Queen.
Now children from across the Wirral and beyond are making trips to visit the charming – and growing – fairy village.  Some of these children make multiple visits to the Driftwood Fairies of Vale Park.  One little girl even insists on coming to see her fairy friends every day. 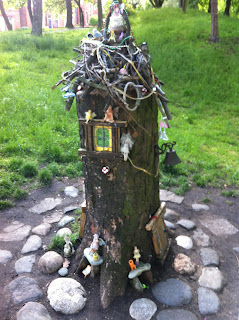 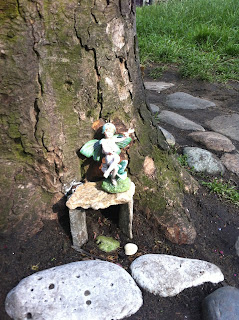 Smiling proudly, Major said, ‘Seeing the kids so happy gives me real pleasure.  They know the names of all the fairies.’ 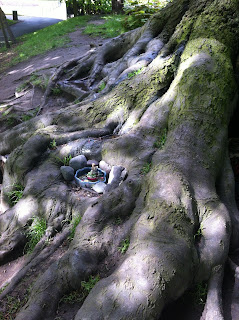 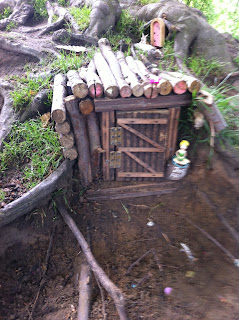 His next project is to construct a chimney for the fairy factory.  This is where they make the Fairy Dust so the pirate ship can fly at night.
I asked Major if he really believes in fairies.  Having visited and the on the , both places where the belief in fairies is strong, Major found no difficulty in saying that he does.
As someone who’s written about fairies in my book, The Last Changeling, I find the subject fascinating.  I recently spent a day searching for fairies with BBC Radio Wales, and many people have written to me saying that they have seen fairies for real.  I was sent this photograph that seems to show a blue fairy atop a classic toadstool. Trick of the light?
Maybe, but it’s a good one. 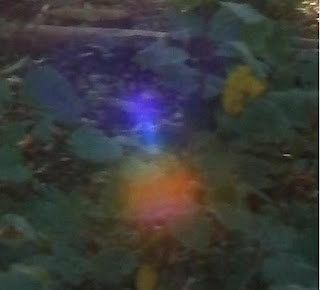 This Christmas, I counted no less than five major companies who were using fairies to promote their seasonal products.   The truth is that fairies are big news – but then, they always have been.  When Charles Isham first imported gnomes to from in the 1840’s, they weren’t just for ornaments.  They were made to lure real gnomes into peoples’ gardens!
Perhaps the most famous encounter with fairies was when Elsie Wright and Frances Griffiths found fairies at Cottingley Beck in 1917 and photographed them. 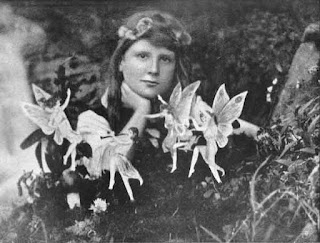 The pictures fooled experts at Kodak and the creator of Sherlock Holmes, Sir Arthur Conan-Doyle.  Many years later Frances and Elsie admitted the pictures had been cardboard cut-outs, but even in old age they still insisted they had seen real fairies at Cottingley and had only created the fake ones when the grown-ups had laughed at their claims.
So, next time you go to , remember to take your camera… who knows what magic you might snap?
If you have had a fairy encounter, I would like to hear from you.  Please contact me via the form at www.thelastchangeling.com
The above article appears in the next issue of Waiting magazine.