It’s been… to put it simply, a bit of a strange week…

On Tuesday I was called to audition for a tough quiz show ‘The Chase.’  (Brit show, Google it).
Much to my amazement I passed.
Whether the day dawns when I will actually face a Chaser – and manage to remember a little more than my own name – remains to be seen.  I have been told, ‘it’s how the questions fall…’ ‘you either know them or you don’t… blah … blah…’

All I know is that it has already been a life-changing experience.  Now, everything has significance, an extra meaning… after all, it might come up as a question!  I am normally unreasonably curious, but that trait has now gone into overdrive… Overdrive?  Bachman-Turner Overdrive, the band beloved by Stephen King… bet you didn’t know he liked them, did you, hey?  See?  It’s like a reverse Tourettes where random things are hastily sucked into my brain rather than being shouted out…

So, in the midst of all this barminess, I decided to put the picture of my book in the Sarasota bookstore, Bookstore1, on Twitter.  You know the one, it looks like this: 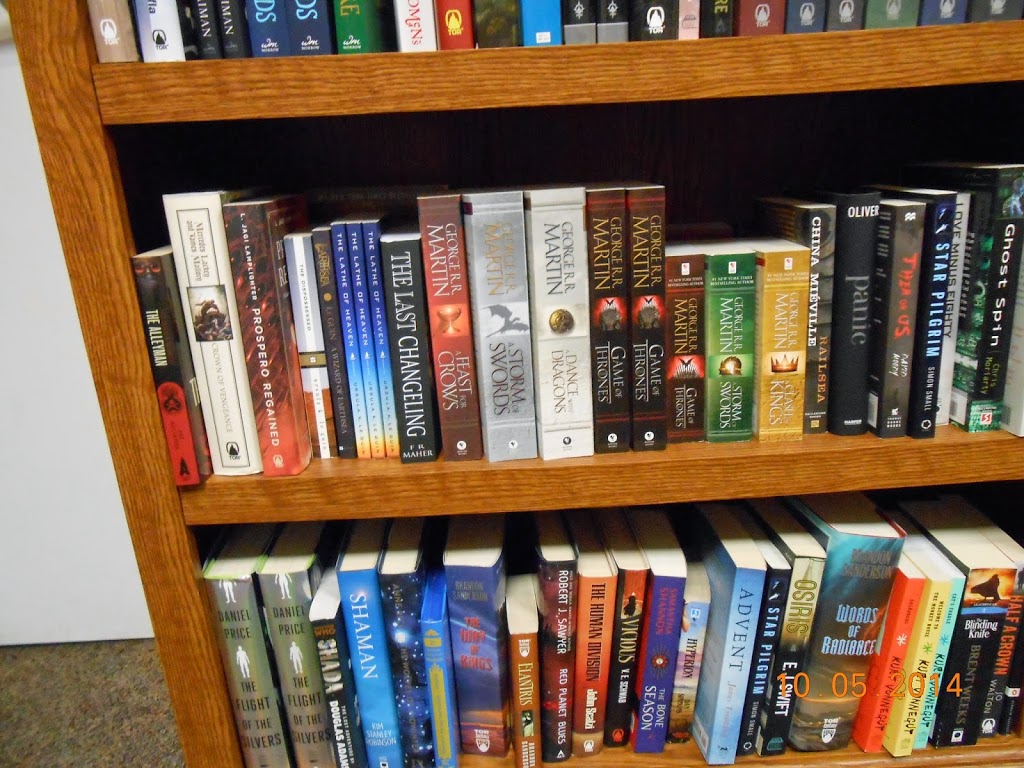 And I tweeted this: (you can probably see for yourself who favourited it… )

…But before he favourited this first tweet, I tweeted thus: 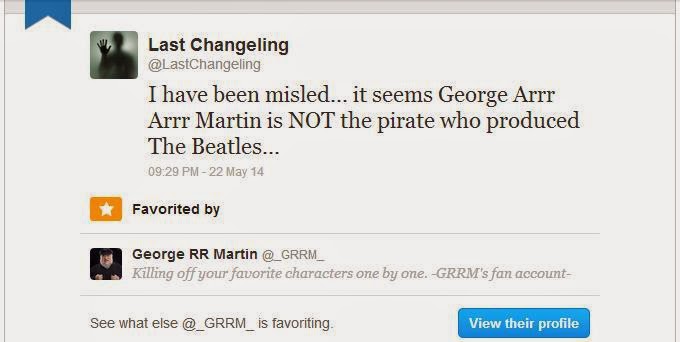 Then I wandered over to my email and found the ‘favorited by….’ messages…
O – my – giddy – Aunt!
George R R Martin had favourited, (yes with the ‘u’, I am a Brit after all), TWO tweets!!!!
So, naturally I tweeted this:

…and do you know what?
Yep.
He favourited THAT one as well!
By now, as perhaps you can imagine, I am developing a heart flutter and an inability to breathe or concentrate… what was the name of that band again?
Hang on a moment… what is my name again?
I had to go and lie down in a darkened room… well a pub actually, but it’s the same thing, surely?
Soooo, I had a medicinal ‘latte’ and tweeted this:

…and do you know what?
I can see you’re getting the hang of this, you’re smart, you know?
Yep.  This got favourited again by George R R Martin.
Sooo, I think I can finally understand why people have long, one-sided conversations with their deities.  It feels good.  The best bit is the mystery of it all.  Are they there or not?
Is it him?  Or is it a random piece of cunning programming pulling my chain?  Has it been created to react to a name?  Drooling like a Pavlovian dog every time it finds George R R Martin mentioned?
George R R Martin
George R R Martin
George R R Martin
Sit!  Roll over!  Lie down!  Goood doggie!
But, what if it IS really him?  This is where it gets quite strange in a wonderful way.  I am indeed having a one-sided conversation with a seriously interesting and powerful individual, who, like a capricious god, has a quirky take on most things.  This is the guy who tweeted to J.K. Rowling that the series would have been better if Harry had been killed off in the first book!
Whilst we mortals all run around going ‘Eeek!’ at that, it’s different in the vast, echoing libraries of Valhalla that these literary deities inhabit.  I rather think that might just appeal to her slightly wicked sense of humour.
Forgive me, great deity of G.O.T., I am babbling…
better go now and research my own name and other likely questions for the quiz….
*sigh*
Like I say, it’s been a bit of a strange week…