Today was ‘one of those days…’
….not bad, but unbelievably brilliant!

BBC Radio Wales has a new programme, ‘The Unbelievers,’ and for one episode I was asked to lead a fairy hunt.
Yes, really.

I suggested a quiet spot, but time was against that, so it was decided that Castell Dinas Bran would be a great place to look for fairies – even though it’s bristling with walkers.
When I told the team that actively looking for fairies meant they were unlikely to let themselves be found, faces fell, but presenters, (John and Mike), and crew, (Rhys and Nathan),persisted, so eventually the hunt got under way and the delightful lunacy began.

I should explain that John is also known as Eggsy from Welsh rappers Goldie Lookin’ Chain and Mike is a stand-up comedian, (tonight he’s onstage with Jack Dee in Hay on Wye), so this was never going to be a scientifically serious expedition… even though they ended the day vowing to find a scientist who could explain the multi-dimensional universe to them… good luck with that one, Mr.Scientist!

A few hours in the company of Mike and John, BBC Radio Wales’ answer to Mulder and Scully saw us scampering, (well, in Mike’s case, hobbling because of his poorly knee), up to Castell Dinas Bran in search of fairies. 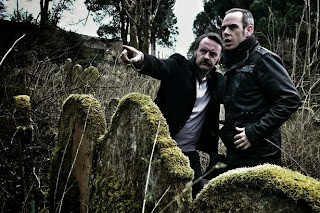 The pair of them took opposing views. John believes in fairies, Mike is a sceptic and I spent the afternoon trying not to laugh as they squabbled like naughty little kids. John’s varying descriptions of Dinas Bran, from ‘stone erection’ to ‘… a grey skull…like Castle Greyskull which would eat me if it had a mouth…’ had us all in fits, even Mike.

Thanks guys for today’s utterly splendid bit of craziness!

The first programme will be broadcast here on Saturday 30th. May:
http://www.bbc.co.uk/programmes/b05xbxb0