The Last Changeling Fact or fiction?

Kaspar, Churchill and The Savoy Grill

A surprising number of elements in The Last Changeling are based upon historic facts. For example, in the chapter regarding Maltby’s visit to Churchill at his home in Chartwell, this story is touched upon – it’s all true… 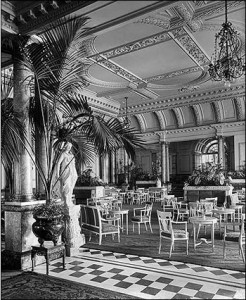 In 1898, Woolf Joel, a South African diamond magnate held a banquet at the Savoy Hotel in London before returning home. When a guest cancelled at the last minute, according to another remaining guest, it left an unlucky thirteen to sit at table. The dinner was a success, but as Joel rose to leave, the same guest remarked that the first to leave would suffer bad luck and be the first of them to die. Joel was not a superstitious man and found the remark amusing – but a few weeks later he was shot dead in his Johannesburg office.

Anxious to avoid any similar incident that could damage their reputation, the Savoy provided a member of staff to sit in when parties of thirteen showed up. However it was an unpopular move and guests felt constrained and unable to talk about personal or business matters. So in 1926, Basil Ionides was commissioned to create the wonderful image of a beautiful black cat, Kaspar. His sole job is to make groups of thirteen up to fourteen. He ‘dines’ with the guests, wearing a napkin tied about his elegant neck, and is served every course.

Winston Churchill became so fond of Kaspar, he insisted the cat should be at every meeting of ’The Other Club’, a political dining club he had founded in 1911. Kaspar still attends the fortnightly meetings. When Kaspar was catnapped by some mischievous Royal Air Force Personnel and flown to Singapore, it was Churchill himself who facilitated his return.

The interesting part of this chapter is Teddy Maltby himself, he did work in Military Intelligence, but he was also an occultist, (his sister in law was Dion Fortune). He is reputed to have recruited Cecil Williamson, (a man regarded as one of the founders of the Post War Wiccan movement, and much hated by HP Lovecraft AND Aleister Crowley!), to send ‘psychic’ attacks against Hitler.