“My dear fellow,” said Sherlock Holmes, as we sat on either side of the fire in his lodgings at baker Street, “life is infinitely stranger than anything which the mind of man could invent.”

I am living in ‘interesting times,’ both a curse and a blessing I suppose.  It started with someone being quite mean on Facebook.  I have been hacked, and for a while, a background picture quite refused to appear. 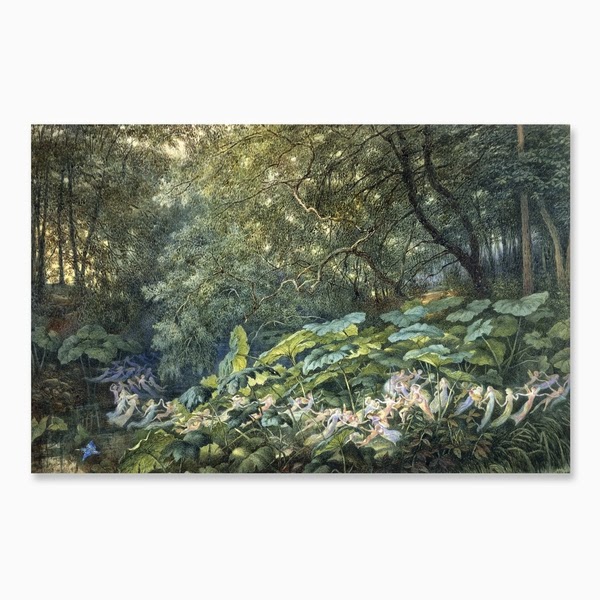 It was chosen because of the perfectly balanced look of the picture – draw a horizontal line two thirds down the picture, and in that top segment you have a charming watercolour of a woodland scene.  The interest is focussed in the foot of the painting, where the fairies glide beneath the leaves.

I looked for it again and found an extraordinary coincidence.  Having put the picture up a little over a year ago, I was unaware that it had been painted by Richard Doyle.
Who?
Richard ‘Dickie’ Doyle.

He was an illustrator who designed the banner for Punch magazine – which was used for 100 years.
All rather ironic when you see how Punch lambasted Dickie’s nephew about his belief in fairies, for Dickie Doyle was Sir Arthur Conan Doyle’s uncle. 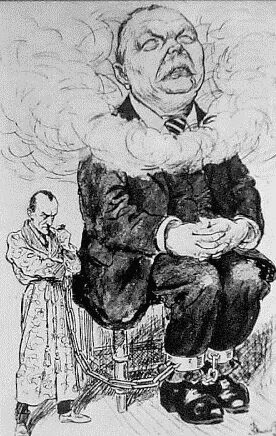 Anyone reading this, who has read The Last Changeling, will by now be beginning to sit up!  This is where the ‘coincidences’ begin to rack up and I begin to wonder if I am being led deeper down this rabbit hole of otherworldly stuff.

The first picture ‘Under the Dock leaves,’ really put Dickie Doyle on the map as a fairy painter.  After that, Dickie illustrated the beautiful edition of In Fairyland, a series of Pictures from the Elf World which is still held to be one of the most breathtaking examples of high Victorian story books for children.  It features the William Allingham poem, ‘Up the Airy Mountain,’ the first poem I ever learnt by heart, taught to me as a child by my father, an Irishman from Kilkenny – and which I have referenced in ‘The Last Changeling.’

Dickie’s same illustrations were also used in ‘The Princess Nobody’ by Andrew Lang.  I am currently studying an interesting book called ‘The Secret Commonwealth of Elves Fauns and Fairies’ by Robert Kirk, a seventeenth century mystic and priest who allegedly was taken away by the fairies.
The foreword was written by the same Andrew Lang.

So, back to the Doyle’s… we have a nephew and an uncle, both highly educated men, both with a strange fascination for fairies.  I followed a link to another page about Conan Doyle’s father, Charles Altamont Doyle, (who co-incidentally married a woman from a Kilkenny family).  Charles was also fixated with fairies and ended his days in a Scottish lunatic asylum.  In 1977 a book of his illustrations came to light and was printed in the UK.  The strange thing is that I have that book, but I had quite forgotten about it.  It sits beside me as I type this.
I know there are such things as families who believe that they have all been ‘taken’ at some time.  Some can quote abduction stories that go back for generations.  It’s interesting that here are three members of the same family with the same, strange otherworldly interest…

Apart from using ‘Altamont’ as Sherlock Holmes alias in ‘His last Bow,’ Sir Arthur Conan Doyle was understandably reticent about his problematic father.  Dickie didn’t mention him either.  Yet both brother and son promoted and celebrated fairies.  Almost as if they were colluding to make Charles’ interests seem normal and unremarkable.

So if a family can draw down these influences, what about specific locations?
I am wondering about this because of William Allingham, writer of the poem, ‘Up the Airy Mountain,’ husband of the famous ‘chocolate-box’ cottages painter, Helen Allingham, of all the places to live, this Irishman settled, for a while, in Witley, Sussex in 1881.
This is all within 9 miles of other intriguing locations in The last Changeling, in what I am beginning to think of as ‘The Fairy Line,’ as the three points line up quite nicely… 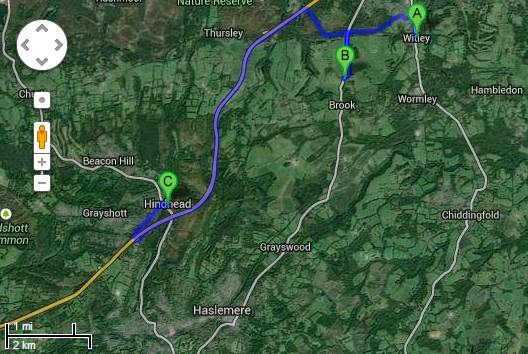 Allingham’s home is point A on the map, it  borders Lea Park, later Witley Park, home of the man airbrushed from history, Whittaker Wright – see my previous post about ‘Sir Arthur Conan Doyle’s Infamous Neighbour,’ (point B) and is less than six miles from Hindhead where Arthur Conan-Doyle wrote the Hound of the Baskervilles exactly twenty years later, (point C).

This has all left me reeling.  There is more… I will post again when I can, but for now I have to get on with Book II …